Upon reaching Malacca, we put up at a home-stay. On the first day of the competition, we lost to Kedah Sports School and the coach motivated us to play better in the next game. Due to tiredness and lack of focus, we lost in the 2nd game with Pahang Sports School. In the 3rd game, we lost again to Terengganu Sports School.

We were very disappointed with the result but, in every game, there is always a winner and a loser. We were not so lucky this time but we will continue to train hard so that perhaps we will win the next time. 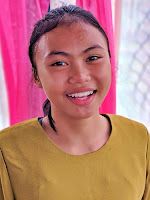 Hannah Lenak is a friendly, cheerful, and funny student. She is happy-go-lucky and the youngest of her siblings. She loves swimming during her leisure time. She is also a weird person who eats weird food, such as mashed potato with ketchup and frogs. She was born in Miri on the 14th of August. In the future, she wants to be a barista and own a cute little cafe.