On 14th September 2019, I joined a program organized by ‘SukaSukaMY’. It was held at Bangunan Yayasan Sarawak. During this program, I learned the basics of video production. In addition, I can get used to speaking English outside of the classroom.

I have learned many new skills on how to produce an amazing video. I really liked the editing skills they have taught. Moreover, I learned that angles are important to show the emotions and the personality of the characters. It will help the viewer to understand what will be presented.

Other than that, I also worked in a team to produce a video. We had to compete with the other schools in Kuching. After one hour, we managed to produce a comedy video by ourselves. Even though producing the video was difficult at times, we did not throw in the towel. Unfortunately, we only got the consolation prize.

From this program, I have learned that it is always better to work in a group so that things will be done faster and easier. I did not regret spending my weekend with my friends at such a wonderful program. I have got so many new experiences and a great time. 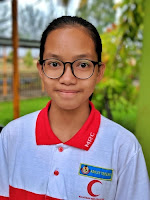 Ashley Teresa Anak Terence Jubi is an untalkative, polite, and kind person. She is the second child and the only girl of three siblings. Furthermore, she is also a proud Bidayuh from Kota Padawan and the class monitor of Form 2S1.