The Lun Bawang, who are also known as Trusan Murut or Southern Murut, is an ethnic group found in Central Northern Borneo. They are indigenous to the highlands of North Kalimantan which is Krayan, Malinau, Mentarang and Long Bawau. They also can be found at Temburong District in Brunei, southwest of Sabah, and rural northern regions of Limbang and Lawas in Sarawak. In Sarawak, the Lun Bawang are officially recognised by the constitution as natives of Sarawak.

There are many unique things about the Lun Bawang people. First of all, Lun Bawang traditional food are porridge wrapped in leaves and barbecued wild boar. Porridge wrapped in leaves does not seem special, but it is what they do. Besides that, Lawas has also got some fruits that are unavailable in peninsula Malaysia, like their red or orange durians and tarap fruit, both of which are seasonal.

On the first of June every year, they celebrate a festival known as Irau Aco Lun Bawang. It is the festival of the rice harvest, but it also showcases Lun Bawang culture. For example, Ruran Ulung is a beauty pageant and Ngiup Suling is a musical instrument made from bamboo.

Most of Lun Bawang are Christians, and a small number are Muslim or Buddhist. There is a rather interesting game that they play during Christmas. The Christmas gifts are placed on a table and those in attendance will take turns one by one to select a gift for themselves. 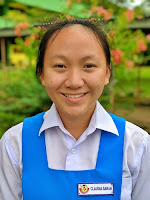 Claudia Sarah Jeffrey is from Lawas, Sarawak. She is 16 years old and a mix of Lun Bawang and Bidayuh.