Where would I like to go for the holidays? These thoughts always come to my mind as the holidays draw near. After much thought, I like to spend my holidays in my hometown. This is because my uncle owns an orchard there and I am essentially a durian person. I just love durians a lot and I cannot wait to eat them!

On the last day of school which was Friday, I eagerly waited for the bell to ring at 11:30 a.m. Then, I slung my bag over my shoulder and made my way home as soon as possible. Once I arrived, I quickly packed my clothes into my bags and waited for my father to come back from his work, since he was the one who would be driving. When he arrived, I rushed towards him and told him that I wanted to go back to our hometown before the day turned to night, but he told me that he was very tired and he could not drive at that moment. I was pretty sad about it and I could not sleep really well that night.

In the next morning, we started our journey at 9:00 a.m. The journey took about 2 hours to my hometown so we arrived by 11:00 a.m. When we arrived, we had a quick lunch and rested for a while. In the afternoon, my uncle invited me to join him in looking at the durians in the orchard, so I said yes and I was on cloud nine. A few minutes later, my uncle and I arrived at the orchard. There were a lot of durian trees all over the orchard.

Suddenly, we heard a loud crash at a distance. I was startled for a moment. Then, we went to the place where the sound came from and we found durians! I picked them up and carried them back to a wooden hut that was built by my uncle. After a moment, there were dozens of durians piled up at the hut and we were very tired. My uncle decided to open one of the durians and it tasted very delicious, although some people hate them because of their smell.

Besides eating the fruit, I also learned to be a durian expert. I asked my uncle to teach me how to tell a good fruit from a bad one, and a ripe one from an unripe one. This was a skill that would stop me from being cheated when buying durians at the market back home. Other than that, there was also a breath-taking waterfall nearby. When I was tired, I usually went there to have a swim while enjoying the sound of the flowing water from the waterfall.

My uncle also sold the durians from his orchard at a stall in the city. The next day, we went to the stalls and started to sell the durians. Here, I learned the art of selling. I learned how people seek out the best bargains. I also learned to become one of the world’s best salespeople! When it was night, all the durians were sold out and we earned quite a lot of money.

In the next morning, I woke up noticing that today was the last day of my holiday. I was very sad but, of course, I brought some durians back home. This was one of the best holidays that I had ever had since I learned a lot of things throughout my holiday. Although it only lasted for three days, the memories and experiences made were very valuable and irreplaceable. 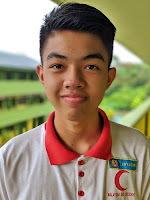 Eryxson Anak Billy is a friendly and a talkative person. He is the kind of friend you need when you are having difficulties in learning, especially in mathematics, because mathematics is the queen of science to him. He also likes to play games but he always reminds himself not to get addicted and to manage his time well. Other than that, he is also an animal lover and he pets animals, such as dogs and cats. In the future, he wants to be a pilot, because his dream is to travel around the world and visits the most amazing places on the Earth!