The Kadazans are an ethnic group indigenous to the state of Sabah in Malaysia. They are also known as the Kadazandusun and found on west coast of Sabah. Most Kadazandusuns are Christians and a majority are mainly Roman Catholic while some are Protestant. A minority are Muslim.

Other than that, Kadazan celebrations revolve around the rice cycle. They also celebrate the Harvest Festival or Pesta Ka’amatan to appreciate god for giving them resources. It is celebrated form 30 May until 1 June.

Subsequently, Kadazandusun is also known for their bamboo crafts and beadwork. Bamboos are a common sight in the Sabahan countryside. They use bamboo for everything from houses to fishing equipment.

The tribal woman are extremely skilled in Beadwork. The type, colour, and pattern of beads worn by the woman are an indicator of their social status and identity. Beads are woven in patterns and motifs inspired by nature, such as flowers, butterflies, birds, plants and other elements which are an integral part of their tradition.

In conclusion, I am proud to be a Kadazan and I hope this ethic group will never go extinct. 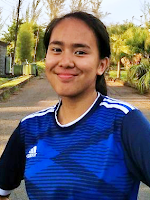 Marsha Amber Donny is a tennis player. She likes to travel and dance, but hates singing. Her friends would describe her as a good listener and a talkative and funny girl.