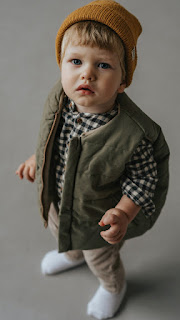 Yesterday, Mordecai went to Pemadam Mall to buy a pair of shoes for himself after collecting enough money. After purchasing the shoe of his choice, Mordecai decided to spend the change at his favourite coffee shop, Setabak, before going home.

Suddenly, a kid ran into him and both of them ended up on the floor. He was confused at first. Once he regained his composure, he immediately helped the kid get up from the floor. What was more shocking was the little one showed a panicked expression on his face with tears flowing continuously.

“Why are you crying? Are you okay?” Mordecai asked, and then checked the boy’s whole body to make sure he did not have any injuries. Unfortunately, the kid did not respond to his questions and instead continued to cry while calling for his mother. From this, Mordecai figured out that the kid was lost. He tried his best to calm the crying kid down.

“Everything’s going to be alright. Let’s go find your mom,” said Mordecai. They searched the whole mall to find the kid’s mother. It was a frustrating moment for Mordecai because he was told by the kid that his mother wore a blue dress with a floral pattern and several women there wore the same outfit. However, he did not give up trying to help the kid because Mordecai felt sympathy for him. It reminded him of when he was smaller and lost in a market. Finally, he was reunited with his mother with the help of a kind woman.

At last, Mordecai and the kid found the child's mother. Both the mother and the kid hugged each other in relief. The mother thanked Mordecai for his help in finding her son. Surprisingly, Mordecai recognized the mother! It was the woman who helped him when he was lost in the market a long time ago! She still remembered him too. It was the most meaningful moment for them.

The moral of the story is we should help others no matter where we are. The person who receives your help might remember you and help you back.

Sherilyn Elnnie is a chubby and cheerful friend. She has a little brother and she is the older sibling. She plays the piano and is in charge of playing it at church. She is also a cat person and loves cats so much. During trainings, she is always focused on how to do the bowling techniques so she does not repeat any mistakes during tournaments.